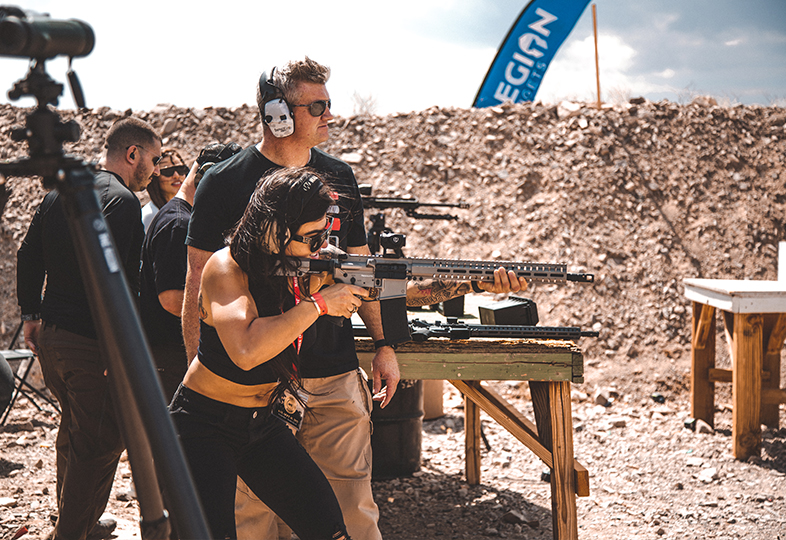 Riton at the Range

Riton at the Range with the UFC

Check out our VLOG over on Riton TV about our UFC weekend.

Ladies and gentlemen, this is the main event… “ITS TIME!!” In this corner we have the Riton Optics crew and in the other we have a whole slew of UFC’s finest men and women MMA fighters!

Let me back up just a minute to tell you the whole story of this incredible weekend. So, John Bartolo, a long-time friend of ours and a longtime supporter of Riton Optics had us down to his studio where he, Brady, 221B Tactical, Vulquartsen .22LR Rifles and Legion Targets did a podcast together. Little did we know John had a surprise for us. Just before the podcast began a Ferrari 812 Superfast pulls up and guess who steps out.. The one and only Dana White!! It was a very cool experience. And as if that wasn’t enough, he invited the whole crew to sit ringside for the fights that were happing the next evening. What a blast. Speaking of BLAST, we were at the range the next day with some heavy hitters! Donald “Cowboy” Cerrone, Claudia Gadelha, Forrest Griffin, Antonina, Cody Staman, Tatiana Suarez, Max Griffin, Anthony Hernandez and special guests Jamie Villamor and Tony “Real World Tactical” Sentmanat!

It was an amazing time talking and shooting with these fighters. We had some dueling trees and even had some moving EXPLODING targets. We finish off with a competition between Riton Optics CEO, Brady Speth and Donald Cerrone!! Let’s just say that Donald left with a prize!

After the range we cleaned up and headed to the fights. We got the VIP treatment with drinks and snakes along with ring side seats. After the fights we met some fighters at Top Golf and fun was had by all parties to say the least. Epic weekend!