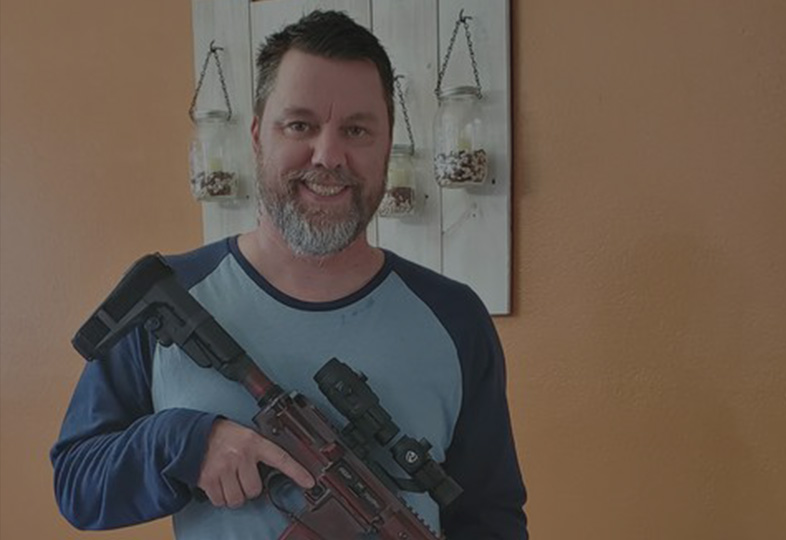 The Story of the “Demon Killer”

It started with a message to the Riton Optics facebook page.

“My 14.5 AR Custom Build. This build was driven by my passion for weapons. But this build had to be different. I was fighting stage 3 cancer at the time this was being built. Kote of Arms and my wonderful girlfriend made this happen and I’m super pleased with how it came out!” 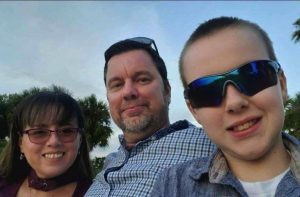 The immediate thought of talking to this man and hearing his story rushed over me. I replied instantly with, “I would love to hear your story! Are you free to chat sometime?”

Little did I know Dan was ready and willing to tell me about his battles and of course his incredible build.

Dan is a weapons enthusiast, hunter, and father. His love of firearms stems from his father. Dan’s parents were both in the military, and when Dan expressed the idea of purchasing a firearm, he and his dad set out and purchased a reliable first weapon, a Glock 19. Dan and his dad spent time on learning the fundamentals of his new handgun and of course what owning a firearm means. Dan has since  built plenty of firearms, all of which he customizes in some way and fashion. Dan told me this;

“Every firearm I own, I shoot. I don’t just fill the safe to fill it.”

Dan has had one hell of a battle with cancer, not only once but four times. He is currently kicking cancer’s butt in remission of Stage 3 Lung Cancer. Dan told me that one particularly bad night he had told his girlfriend Laura;

“If I beat this thing, I am going to build another firearm”.

From time to time Dan would tell his girlfriend Laura all of the parts and pieces he wanted this build to have. He told me he never realized that he was telling her about the build. The wonderful thing about that was Laura was picking up on all of the things Dan wanted out of this future build. As anyone would do she took all of those specs he mentioned and ran with them.

Laura contacted Dan’s friend Trevor at Kote of Arms in Melbourne, Florida with the build specifics. Sometime later, before he had even fully “beaten” the cancer, he received a call from Trevor to come and pick up a firearm. Dan was knocked back not knowing what he had ordered or what this “firearm” could be.

The firearm in question would come to be known as “Demon Killer”, named by Dan’s son Taylor. The crazy story is that Taylor names all of his dad’s firearms. Before Taylor even knew of the battles his dad had been fighting he named the gun “Demon Killer” because of the battle worn and bloodied Cerakote job.

Trevor with the help of everyone in his crew put together this beautiful AR build:

The Cerakote job was done by Trevor and his team to look like it had been through hell and back, to show example to the toll that Cancer has taken on Dan’s body. He told me that the gun looks battle worn in such a way as if it’s been drug on the ground, much like his battle both mentally and physically.

Little notes all over this weapon to remind Dan to never give up. The dust cover is etched with “Keep On Fighting” and “%$#@ Cancer”. Of course both the thirty round magazines adorn the cancer ribbons.

Dan is an incredible human being. Him and his family are loving their lives. Laura, who has never really been fond of firearms, decided three weeks ago to give it a shot and of course loved the experience. Taylor (Dan’s son) is currently target shooting on his new AR platform .22.