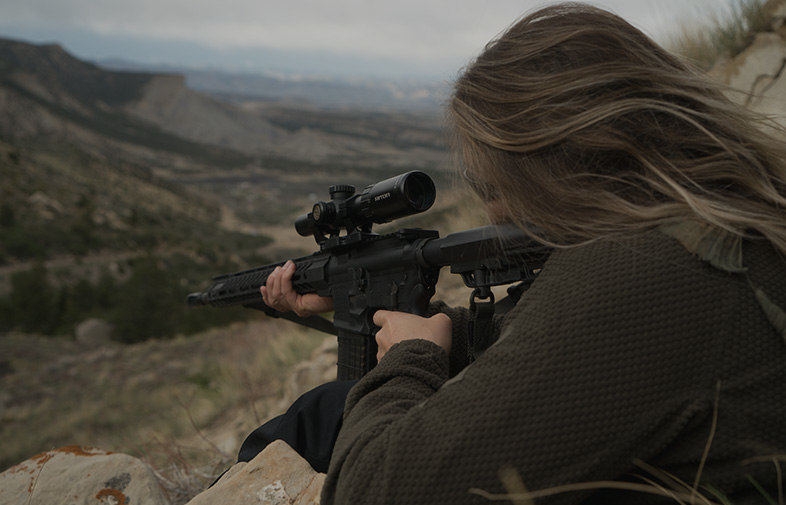 Prior to the 1800s, the only way to aim a firearm and hit something with any regularity was with open style sites. This type of aiming system has several drawbacks to it. First, if the sites are mounted to the firearm and are not adjustable, you need to adjust your point of impact for your bullet by placing the site in a different place than you want the bullet to hit. While workable in closer range situations, this makes it much more difficult to perform any long-range shooting.
In the early 1800s, the very first “peep” sites came to be a distinct advantage as they allowed adjustments for windage and elevation. The focusing of the eye through the rear “peep” aperture created a generally sharper image of the site against the target. This had a profound effect on the range at which a firearm (most often a rifle) could be fired accurately at a down range target.

It should be no surprise, then, that the greatest advancement in hunting and shooting in the last 100 years is the advent of telescopic sights. From the first documented telescopic sight made by Morgan James around 1840 to the first batches of precision rifle scopes for hunters in the period after World War II, optics have gone through their fair share of revisions and improvements. Most of the early telescopic sites were of a fixed power and would be considered rather primitive compared to the ones the average hunter tops his rifle with today. Fast forward to 2017. A small Tucson, Arizona based company named Riton Optics, started by a military and law-enforcement veteran, sought the advice of two of the biggest names in hunting and shooting to design one of the most advanced scopes on the market today.

Craig Boddington is one of the most well-known writers and personalities on the subject of hunting and firearms in the world today. He is a professional hunter, a television show host, and author, columnist, and Marine. He has over 4000 published magazine articles, is the author of 25 books on hunting and shooting, has been published in a dozen countries. He is certainly one of the top results when anyone in the know is questioned as to whom the biggest experts are in the industry.

Charlie Melton is a real-life American hero that trained one of the most famous snipers of all time- Chris Kyle. Charlie joined the Navy at age 19 and completed the Basic Underwater Demolition/SEAL course class 176 and became a member of SEAL team 2. Later in his career he became the leading Chief Petty Office of Sniper School, was deployed twice as a member of SEAL team 5 and is the recipient of the Bronze Star, Purple Heart, Sailor of the Quarter, Sailor of the YEAR for all SEAL teams, and was the runner up for PACIFIC-FLEET SOY. Since his military retirement in 2015 he founded Charlie Mike Precision and in 2017 set the world record for long range shooting hitting a 40 inch target at a distance of 5,000 YARDS!

The Riton Mod 7 1-8x28IR-H was developed as a short to medium-range hunting scope that can be used for any hunting situation – but especially useful for dangerous game. The Mod 7 1-8x28IR-H is a well-balanced scope capable of fitting any caliber of weapon while providing quick acquisition targeting at a low magnification power and the ability for precise targeting at increased magnification levels. The Mod 7 1-8x28IR-H is a Second Focal Plane (SFP) scope with Riton’s German #4 Mod 1 Illuminated reticle paired with HD/ED glass and an indestructible one-piece 34mm aircraft grade main tube.

Riton Optics’ tactical version of the Mod 7 1-8×28 features the Riton Tactical Mod 1 Illuminated reticle with six daylight-bright illumination settings. With a First Focal Plane (FFP) reticle, this optic can be used on a true one power magnification similar to a “red dot” type sight, where both eyes are open for quick target engagement while clearing rooms or during close-quarters combat. The Mod 7 1-8x28IR-T offers a distinct advantage once the magnification is increased, giving the ability to accurately engage targets and range estimate in every conceivable tactical situation.

Every product that Riton makes is backed by Riton Optic’s Unlimited Lifetime Warranty, which guarantees a rapid replacement with a brand-new product.

To check out the new Riton Optics 1-8×28 scopes and many others, go to the Riton Optics website by clicking here.